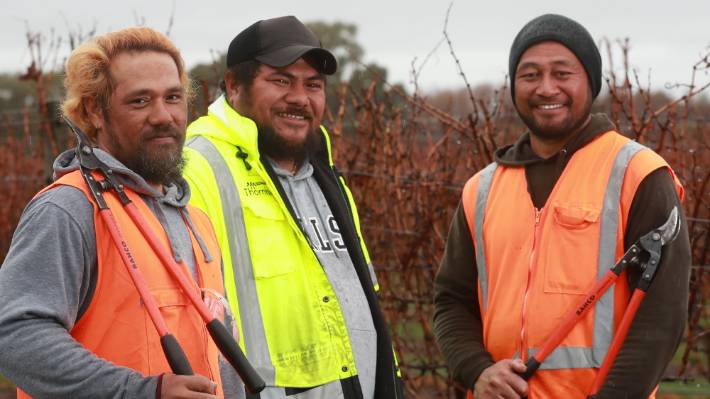 RSE workers, from left, Pine Eli, Pio Te'o and Taunuu Samoala have been in New Zealand since February 2020.

Pio Te’o has been in New Zealand since February 2020, just before borders shut in the fight against Covid-19.

Te’o, a supervisor for Thornhill Contracting, has five children back home in Samoa. He video calls them every day.

Until now, workers like Te’o have had to make the decision to stay in New Zealand to work in the Recognised Seasonal Employer (RSE) scheme, or return home with no idea if or when they can get back to New Zealand.

But Prime Minister Jacinda Ardern announced on Monday last week that Cabinet had agreed in principle for seasonal workers from Tonga, Samoa and Vanuatu to travel to New Zealand without undergoing a two-week stay in MIQ.

It means for people like Te’o, there is now an avenue to return to home to Samoa, and come back to New Zealand. But that still doesn’t make it an easy decision.

RSE workers from Tonga, Samoa and Vanuatu will be allowed to enter New Zealand without a two-week MIQ stay.

“We miss our family, but at the same time, we have the best opportunity to make money ... providing all the things that are needed for our family back home,” Te’o said.

“It’s an important opportunity for people like us stuck here because of Covid.

“With this news coming out this week about reopening the border for all the RSE workers to come in, it gives us a big challenge. We have to choose what is better for us and what’s the best option to do. To me the best option is to keep going.”

But the announcement was still a relief, he said. At least now he knew he could go home, and come back again with a lot less hassle.

Te’o planned to put his head down and keep working until September next year.

“Once we’re finished all the work by next year, we’re going to go back, have a break. Then we’ll come back if the boss allows us.”

But for people like Pine Eli, from Samoa, home was calling.

When Eli left for New Zealand in early 2020, he had a 5-month-old baby. When he returns home later this month, on August 26, he would have a toddler.

He said he had decided to leave New Zealand because he had plans to renovate his house, and wanted to spend time with his six children.

Thornhill Viticulture and Horticulture Contracting South Island general manager Alistair Mitchell said there had been relief for workers who could now return home if needed.

“What I think upset them was the fact that if they needed to go home, there were real barriers to getting there,” Mitchell said.

“For some, there were no flights at all. It will be a relief that they can get home when they want to ... Some of the boys have really struggled.”

Samoa, Vanuatu and Tonga had all managed to keep Covid-19 at bay, with only border cases and no community transmission.

Ministry of Business, Innovation and Employment refugee and migrant services general manager Fiona Whiteridge said the one-way quarantine-free travel with Vanuatu, Tonga and Samoa had been positively received by many RSE workers, but it had also raised questions for those workers that were not from the countries included.

“Many RSE workers have remained in New Zealand since the border restrictions as a result of Covid-19. These workers have been in New Zealand for over 18-months with limited or, in some cases, no pathways available to them to be repatriated back to the Pacific.

“This announcement will provide more certainty for those workers from Vanuatu, Tonga and Samoa who want to go home and return to New Zealand for another season.”