Need a Haggadah? There’s a QR Code for That.

Some shun phones at the Seder table. But, these days, some also welcome them. 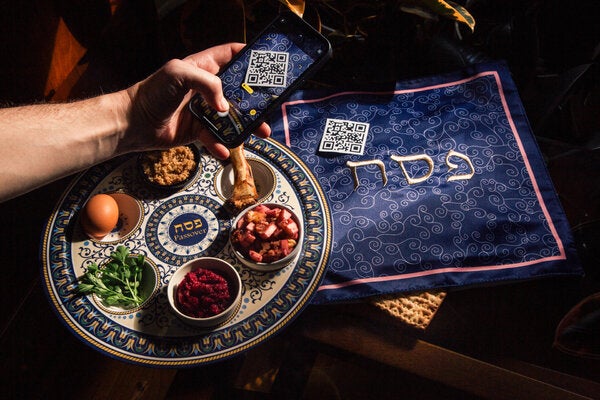 Every year, the Lawrenceville School, a boarding and day school in New Jersey, has a large Passover Seder for students, family members, alumni and faculty. After doing the Seder remotely in 2020 and in a tent in 2021, they will be back inside this year.

When guests arrive, they will see a familiar scene of a room set with tables full of Seder plates, glasses of wine and boxes of matzo. But this Friday, when Passover begins, there will be one more item on the table that may feel new, at least in this setting: QR codes.

The QR — or “quick response” — code is how guests will have access to the Haggadah, the text read during the Passover Seder and which tells the story of how the Jewish people escaped slavery. Once they pull it up on their phones, they will use their devices for the rest of the evening, to take turns reading stories and to follow along to songs and prayers.

Lauren Levy, a rabbi and teacher at the school who leads the Seder, came up with the solution last year when some of the guests were joining the Seder virtually and didn’t have Haggadot (the plural of Haggadah) at home. “I got the idea when I was at a restaurant,” she said. “I said to myself, ‘This is actually going to be way more inclusive and accessible.’”

While using a QR code was an answer to a practical problem, she also likes what it symbolizes. “Passover tells the story of us leaving slavery behind and heading the heck out of Egypt to move to freedom. We were leaving the old school place behind and moving forward,” she said. “I think the QR code Haggadah integrates this idea. It’s cool to me that we are taking the next technological step for Passover.”

It can already feel like QR codes are everywhere. You scan them at restaurants to get menus; at events to register; at stores to pay; at museums to get more information about the work on display. And now they are even part of the Seder, an ancient Jewish tradition.

Jewish leaders are using QR codes as an easy way to get people the material they need to participate in the Seder or to enrich their experience with supplemental materials.

Gathering Around the Seder Table

Passover, which begins this year on the evening of April 15, is one of the most important holidays for Jews around the world.

And while some Seder-goers like them, others feel that phones should play no role in this tradition, where the focus has always been on in-person sharing and discussion. (Many at Seders will not even use their phones, so a QR code Haggadah is not an option.)

Even Rabbi Levy is keeping a few old books around for those who object to the modern technology. “We have some paper copies, because they’ve been around for years and years, and they have wine dripped on them and brisket juice, and some people like that,” she said. That group includes her own daughter, Rebekka Levy, 38, who attends the Lawrenceville Seder with her own three children, ages 9, 6 and 1.

“I like the QR codes because you can add more information to them, but there is something a little sentimental about the older Haggadot,” she said. “They are a little dirty, and they’ve been made that way over time.”

Ruth Langer, a professor of Jewish Studies at Boston College, said Haggadot have never been stagnant, at least in the modern era. “In the contemporary period you have people printing traditional Haggadot but adding additional materials that they like,” she said. “The basic structure is almost always the same, but people like to add in some poetry here and there.”

Similarly, it is not uncommon for people leading the Seder to make their own books for guests by drawing from different resources or to create packets of supplemental material — sometimes relating the text to current events — to add to the traditional text. Now, with a QR code (many websites and apps exist to help generate one) you can save some trees and add more interactive elements, like songs or videos.

A year and a half ago, Zion Ozeri, a photographer in New York City, created a Haggadah in an eBook version where large, bold photographs of Jews around the world were meant to spur discussion. He loved that people could interpret the pictures themselves, but then they could click a link to get more information about the photo, whether it was insight from a famous scholar or a recording of a Passover melody sung in that region.

A page from “Pictures Tell: A Passover Haggadah,” by Zion Ozeri, a photographer in New York City. Credit... Zion Ozeri

This year he wanted to turn his Haggadah, named “Pictures Tell: A Passover Haggadah,” into a coffee-table book, but he couldn’t figure out how to add the extra information if the book wasn’t virtual. So he turned to QR codes. “It makes it more engaging,” he said. “It makes it easy for someone who is leading the Seder to first ask for people’s own interpretation and then go deeper into the image.”

He understands that encouraging people to use their phones at the Seder has its drawbacks, but he believes the good outweighs the bad. “I can see people under the tables pulling their phones out,” he said. With this, “at least they are using their phones to actually try to engage with the Passover conversation.”

Rabbi Levy agreed. “I could make my kids in class put their iPhones away, but I would rather say, ‘Let’s use it to look up what this means or let’s investigate something we encounter at the Seder,’” she said. “You can use phones in a positive way.” (You can also typically use a QR code while the phone is in airplane mode, which disconnects the Wi-Fi, thus limiting other mobile distractions.)

Bari Mitzmann, an Orthodox Jewish Instagram influencer who lives in Las Vegas, put together what she calls a Haggadah companion with fun Passover recipes and mental health check-ins. Her Haggadah, “Hakol B’Seder,” which can be bought in print or downloaded online for $14, includes a QR code that takes people to a meditation that is supposed to center them through what can be a chaotic holiday (“there can be family drama,” she said). 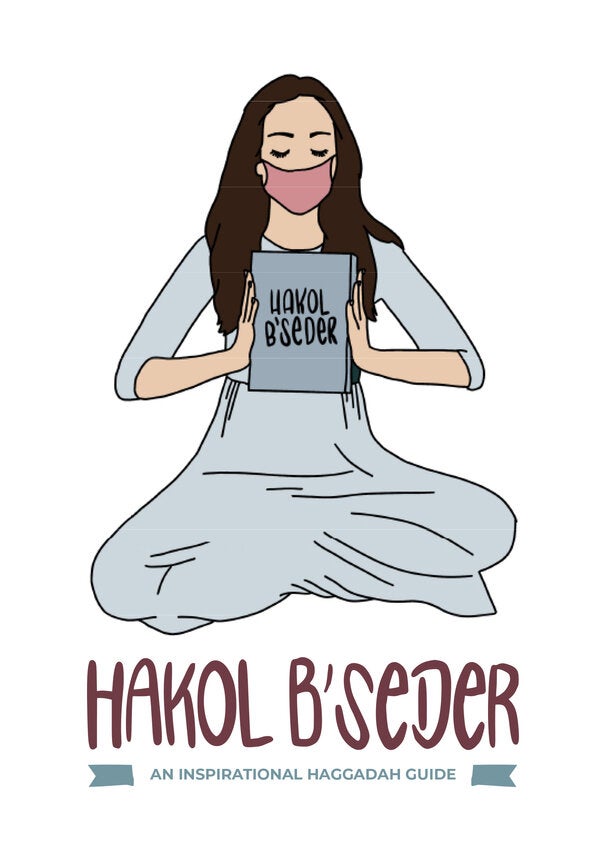 “A majority of those who purchased my Haggadah companion wouldn’t use their phones at the Seder, but they can do the meditation before,” she said. “There are exceptions to that, though, and some people told me things like their boyfriend enjoyed the Seder because of this meditation, even though he isn’t Jewish.”

A couple other Haggadahs that contain QR codes for supplemental materials: “Simply Seder: A Haggadah and Passover Planner” is a family-friendly option, linking to games, activities and more; the “iTaLAM Haggadah” links to songs and animated stories.

Then there are those people who don’t want phones to be part of the Seder, even if they give access to meaningful material.

“I would probably be horrified if guests at my Seder pulled out their cellphones to access information from a Haggadah with QR codes, not because it was ‘against Jewish law’ but because I would feel it makes them less fully present as human beings,” said Vanessa Ochs, a rabbi and a professor in the religious studies department of the University of Virginia, who does a family Seder every year.

“Especially after spending two years of having my iPad open at the Seder table so I can communicate with family,” she said, “I want this year to be a much more pristine experience.”